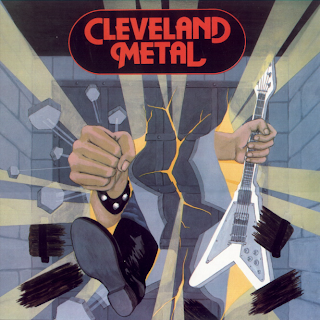 When you think of Cleveland...well, you probably don't. Anyways just because you never think about it doesn't mean it doesn't exist, and like a lot of ugly American cities in the '80s it had a pretty fertile metal scene of poodle-haired dirtheads with big dreams of rocking their way out of the Cleve. In 1983 Clubside records released this kick ass regional compilation of the city's most hopeful headbangers, most cleverly titled "Cleveland Metal." Before getting this from the godly §ĬÇҜИξ§§ ΛБΘЏИĐ§ blog, I had only heard of Shok Paris and only remembered them because of their exceedingly assy name. Clearly, none of these bands broke out and hit the big time, some are probably not even known in their hometown today, but that by no stretch of the imagination means that they are bad.
The whole affair starts of strong with Black Death who are believed to be the earliest known all African-American Heavy Metal band. They contribute two great songs (perhaps the album's best) titled "Taken By Force" and "Until We Rock," the latter having one of the worst guitar solos I have ever heard in a metal song. Sadly, Black Death's drummer, Phil Bullard, passed away back in February of cancer.
Sacred Few are up next with the track "Sacred Few." A tinny hard rock number with the smokey bar room vocals of Sandy Rago, who sounds like a female Bon Scott. Sacred Few are kind of lame, but like I find myself saying a lot here, full of spirit and enthusiasm. This is just hopelessly pub band material.
Cerberus just jump out of the speakers with their spunky NWOBHM-esque instrumental "Rampage." Cerberus never released a proper album, which is a shame because the dudes had some skills.
Jagged Edge got me excited. Maybe because their song "Eyes of Fire" is so confusing and wonky, and the singer, Frank Leo, sounds a bit like Bobby Leibling at times.
Mistreater is pretty great too, having more of an early '70s hard-rock vibe to their Metal. Curt Luedy's oversinging gets to be a little much at times but don't fault the guy for trying to do a bit more. Their contribution "Without You" left me wanting to hear more from Mistreater.
I guess Breaker were one of the better known Cleveland bands. They definitely sound more slick and produced then the others here and they were also quite proficient players, but these things are probably why I found this to be less interesting than the other bands. I imagine if these guys had a better singer and didn't look like the guys from the shipping department, they might have enjoyed some commercial appeal and all the cocaine and fake tits that affords.
Shok Paris, like Breaker, seem to have had the chops to rise above the chaff but were plagued with a horrible vocalist and that ridiculously gaytarded name. Jesus, could nobody in Cleveland sing?
Then almost as if to cleanse the palette after those last two duds, "Bloodline" by Sorcerer gallops in on a a greasy steed made of metal and beer, and quickly dismounts to bring forth some tasty wah-wah doom in the song's middle. Sorcerer is the best thing here by a long shot.
Cleveland may not be Stockholm, or London, or The Bay Area but metal knows no boundaries, and regional comps like this remind us that metal was and will always be ubiquitous. They give record nerds that giddy hope of possibly discovering a monumentally cool band that never got the respect they deserved when they were slugging it out in the trenches of their sucky hometowns. Cleveland Metal rules even if Cleveland doesn't, and that is a testimony to the rulingness of metal itself, right?
Oh, and if you are sitting on any recordings by Black Death, Jagged Edge or Sorcerer you should share those with me.
Here
Posted by Aesop at 12:00 AM

San Francisco's own Stone Vengeance pre-date Black Death as an all African-American Metal band.. Formed in 1978, they were on alot of Metal bills around the Bay Area during the 80's NWOSFHM Dayz.. and they're still together having just supported NWOBHM legends Raven in S.F..

I'm well aware of Stone Vengeance just wasn't sure when they started. More important is the fact they have a song called "Ho Stroll" about prostitutes.

Jamie from Boulder told me about this a long time ago. Always wanted to hear Breaker. I always assumed this comp was on AUBURN Rec's.

Actually another reader sent it along but thanks. Perhaps you could uncover some more on Sorcerer. Their track on this comp is clearly the winner.

I picked up the Black Death demo a few weeks ago from the Lockjaw blog.
The link they have posted is
http://www.megaupload.com/jp/?d=YRGBD4K5

You really should check Mistreater's first LP, Hell's Fire. It's top notch basement teenage NWOOHM. I originally was blown away by that and seeking the encore when I found this on Sickness Abounds...frankly, I was not nearly as impressed by the Mistreater track here (nor the rest of this comp) as opposed to Hell's Fire...check it here:
http://www.eggcityradio.com/?p=141

Cool, I dled an album called "Swami" by them I found somewhere but thought it wasn't very good.

You'll dig this one, Tanaka. Pleeeease comment more, your opinions, I imagine, are as close as we are going to get to those of an extraterrestrial.

Here's another song by sorcerer. I'm not sure if it's the same band, but it sounds like it could be.

Dude, the first time I ever heard Shok Paris was on a split LP with the Pantera that featured Diamond Darrel. I'm pretty sure it was Metal Magic, but it could have just as easily been Power Metal. Which I've always thought was the funniest thing about Shok Paris.

BLACK DEATH is Back!!! Check them out myspace.com/blackdeathcleveland

DEC 11 BEACHLAND Check them out!!!

Black Death were technically around as early at 1977, so that would make them first.