In The Shadow Of Steel 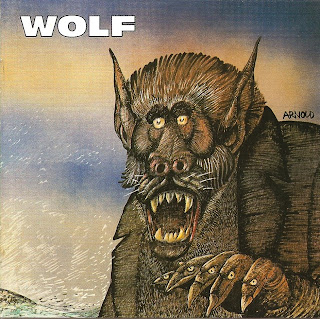 Some Swedish young'uns completely fueled on the metal from before their time. Kind of like if Iron Maiden and Mercyful Fate met in Örebro one dark and gloomy night, and conceived a love child who ended up looking more like the Maiden side of the family. Here is Wolf's self-titled debut from 1999. Since its release the band has gone through many line-up changes and has failed to hold my interest (the second album was great, not so much the next two.) The youthful exuberance and sheer joy that pours out of this album hasn't really been matched even though their skills as song writers and musicians progressed. Not terribly original, and probably nothing that you haven't already heard done a million times before, but originality isn't always your best entertainment value, and sometimes things are cliche simply because they are good.
Here
Posted by Aesop at 12:01 AM

yup, this one is pretty great. I think it sort of falls away towards the end but anyway.

a great band, and still one of the most absurd album covers in my collection. The wolf on the cover is clad in a lovely brown wool sweater and an equally fashionable brown corduroy blazer.

yeah, haha, I just noticed the coat. it's stupid, but actually not really ugly at all. quite cool looking, in fact. and the expressions on the faces of the bird-fingers are hilarious. one of them is looking out going "YOU!! I KNOW IT WAS YOU!"

The cover was done by a well-known Swedish comic artist Hans Arnold. It's kind of like being an American metal band and having Bernie Wrightson do your cover for you. Hans Arnold also did the great ABBA greatest hits cover seen here:

The sweater/blazer on the wolf makes him seem like a lycanthropic Dick Cavett.

good album but what did it for me was the cover art.it definitely made me want to hear the music inside.and thanks to you guys now i noticed the wolf is wearing a sweater and a blazer,which makes it even more absurd,funny and therefore great for me.

Electric Raga! Nice! I almost forgot about this record...thanks Aesop for reminding me I must give this a spin again.

I really enjoy this record and Black Wings. Evil Star isn't bad either. But, yeah, the first two are easily my favorites.

I'm glad to hear that others appreciate the cover art. I fucking love it.

I feel like I'm getting a reverse engineering of these guys. I bought the latest album and liked, but was non nonplussed.

Hearing this makes me realize what all the hype was about.

That cover art kicks my ass!

orale'-
the link is dead ese',but no vatos checked it out for like a longass time anyways,so fuck it eh

wanted to hear that shit though,homes

i only barely checked it out right now,but you got a firme' blog anyways

say man,that link is dead!!! fuck,i hella wanted to hear what a album with a wolf in a sweater and blazer on the cover sounds like. that cover is awesome,the tone and atmosphere of it totally reeks of early 80s import metal..ill listen to it on youtube,but i totally woulda d/l it from here...and my captcha is