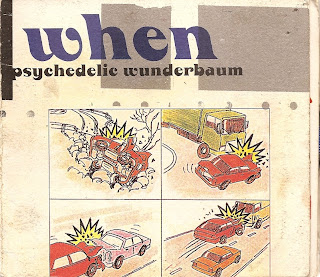 When are a staple in the Norwegian avant-garde electronic alterno-psych scene, if there even is such a thing. When is the work of Lars Pedersen and a number of miscellaneous collaborators. The band's beginnings date back as far as 1987 with the Drowning But Learning album. Eleven more albums have since been released. As the '90s drew to a close, When enjoyed a bit of attention due to the endorsements of several Norwegian black metal bands who were themselves heading in a more experimental direction. In fact, the Psychedelic Wunderbaum album (1998) was released through Garm of Ulver's label, Jester. This is my favorite When album and a great introduction to this band. When is hard to describe. The best I can do is to call it psychedelic pop breakbeat acid weirdness. So infectious and bubbly, yet a chord of uneasiness permeates the entire work. In 1999 Psychedelic Wunderbaum didn't leave my discman for weeks. It was absolutely habit forming. Let's see if it has the same affect on you.

ah, killer. Have wanted to check these guys out for a while now. Thanks a lot.

this is pretty f'in incredible. definitely gonna be gettin a lotta repeat spins around here. thanks as usual.

tangentially related in the sense that they're both Norwegian, MoHa! might also be up your alley if ya dig stuff like this and haven't checked em out already... just discovered em a few days ago myself... best description i've seen/read anywhere is "a free-jazz Lightning Bolt with electronics"... i'd post some myself but as far as i can tell, everything i have is still in print so i probably won't... still, check em out if ya haven't

in the meantime i'll be enjoying this. thanks again.

Never heard of these guys before, thanks for something new to check out.

MoHA, huh? I'll look into that.

much like the Bogus Blimp record you have posted,this is strange,eccentric and wonderful music.thank you very much.

Both WHen and Bogus Blimp are on the same label.

This reminds me of a weirder Disco Inferno.
Or maybe early Meat Beat Manifesto without the not-so-good rapping.

this is a great album; but I hold Svartedaun as one of the darkest/morbid records I own. Interesting shift in style with this one.

ah so weird and rad. dig ulver a lot already, nice to hear something sort of in that strange direction.

thanks a bunch dude
-dan

I grabbed this when you posted it...listened to it last night. What a fucking mindbomb. Cosmic Hearse is one of the best - keep it up!

One of a kind mind-bender. Aces in my book... Thanks Aesop.

first up, thanks for the great work done by Cosmic Hearse.

Now I hate being the one to moan but I've been constantly running into problems downloading from zshare.
I'm constantly redirected to the download page when I actually click on the link itself.

Would anyone have a tip as to why it's doing that?

I seem un-able to get zshare to work. It just keps looping by telling me to click for download..wait for link, then back to click downloand and wait for link..:( This is the only When album I don't own..it sold out soon after it's original release I remember.

i've gone back to this album so many times since i first dl'd it back when it was originally posted. amazing shit and thanks so much for turning me on to this. everyone i've played it for has been thoroughly perplexed/amazed by how current this record sounds. if these dudes came out now and were from brooklyn w/ skinny jeans and white sunglasses, we'd probably be sick of hearing about them. next level.

Eons, so true. Be sure to look into their other albums (they have like 10 by now) not as frenetic as this one but still amazing pop tinged high art weirdness.

This record was great for me and my girlfriend (she is a Norwegian goddess) to clean up and work around the house to. I usually am not a huge 'electronic' or dancey music fan but that air of unease and weirdness kept us freaked out while tapping our toes. Cheers.

Check out the early albums, as they are the best imo. "Drowning But Learning", "Death In The Blue Lake", "Black, White And Grey", they are just incredible! Also Gynt and Prefab Wreckage are highly recommended. There is also a great compilation of the earlier (pre Jester) period, called Writercakebox, a nice introduction to early When. And then you have the Svartedauen album which is scary, to put it mildly... Strangely enough When is not that famous even in Norway, many people including music afficionados have never heard of him...

Great stuff! If you'll pardon the ad, there's more When to be found at my blog: http://schwebeablaut.blogspot.com/. Thanks & enjoy!