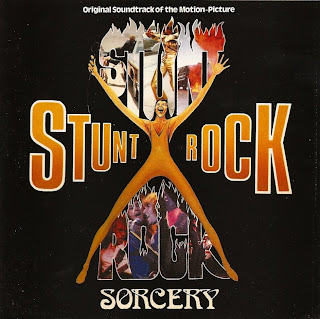 "The Stunts! The Rock!" read the tagline for Brian Trenchard-Smith's epic 1978 film Stunt Rock. He enlisted the talents of a young LA band called Sorcery to play themselves. The plot is rambling and incoherent and is only there at all to bring rock and stunt together. I guess what happens is a stuntman moonlights as a member/pyrotechnician for Sorcery and has some trippy flashbacks about stunts and, um, rock or some shit. Though their official website claims "their stage show made people like KISS jealous!" and "some of the BEST '70s hard rock that ever came out of that era," I find this to be in the category of bad/good. Corny and dated, the kind of stupid idea that could only come about in the '70s. Stunts, Rock, Stuntrock!
Here
Ahhh, fuck it. Here's the trailer, but I'm only including it because of that awesome wizard.
Posted by Aesop at 12:36 AM

This is awesome. Love the wizard.

I couldnt ask for a more engaging trailer! I mean if there is a record I need to own off this blog its fucking Stunt Rock!

the wizard is so cool.i hope youtube has more videos by these guys.

Being a teenager, the word "hardcore" makes me think polished studio shit made by guys with eyeliner and emo fringes, thus something to avoid. But the hardcore you've posted in this blog is the real shit. Really good, cheers.

I don't know of the "rock and roll" practiced by Sorcery, but Grant Page, the awesome guy doing all of the fantastic stunts in Stunt Rock, is the balls-of-steel man who did the stunt co-ordinating for (and most of the really dangerous stunts) in the Mad Max movies.

I saw this band LIVE in L.A. back in the 80's. THEY WERE AWESOME. They headlined over Van Halen and they stole the show. The film StuntRock doesn't really show you all of what their live show was like. I guess the Director and Editor had more to do with that. SORCERY was unreal live and I have their other LP's and Dvd's. They were also in other films and Dick Clark specials as well.
Well worth checking out on Youtube!
One more thing...The 70's and 80's had better music than the crap out today!!!