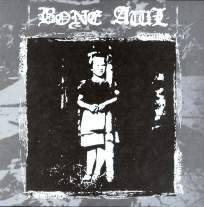 Bone Awl's second release was the seven inch EP called Night Is Indifferent. It was released in 2003 in a limited run of 400 copies. It's raw, it's primitive, it's Bone Awl. This record is not your friend, it won't help you through a difficult time in your life, it just won't. It's as indifferent as the night of which it speaks. Fuck yourself.

Your description alone made it worth the downlaod. Thanx Aesop

Because of you i am addicted to this band the music is so harsh, Thanks Aesop

Who fuckin' needs friends anyways, huh?
Hadn't heard this one, thanks.

God, so fucking harsh and vicious. This band just kills.

Finally got a TB drive so I can actually download stuff from you rather than looking at it like a moneyless kid looking inside a huge toystore. And so I begin with your Bone Awl releases which were recommended by a good friend of mine. And now I'm addicted to them, too. Shit, I can listen to this stuff all day!