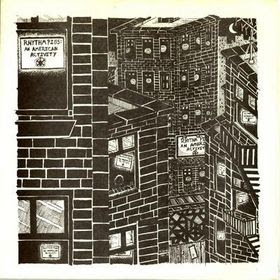 The Rhythm Pigs came out of the box head and shoulders above their peers. They had to do this while living in Texas of all places and they triumphed. On their debut, the An American Activity ep the band melded two opposing ethos of hardcore in the '80s: the humor and wise acreage of bands like A.O.D. and The Gay Cowboys and the forceful rippitude of bands like Raw Power and C.O.C. An American Activity contains one of the greatest hardcore songs ever, Military Fairy. They were smart, cynical, and snotty, yet still totally ass-kickin' when they wanted to be. I didn't care for anything they did after this but An American Activity alone is enough to ensure the Rhythm Pigs' place in the Hardcore Hall of Fame, should there ever be one. This ep was released in the very punk year of 1984.
Here
Posted by Aesop at 12:08 AM

Very awesome post here, thank you. I've been looking for this one for ages.

Hi. I appreciate all the great releases you post on here. Will you be posting either of the Grinch lp's in the future? Thanks!

Weird request but I do have a post about Grinch planned. If you know where I could score a copy of Eden, lemme know.