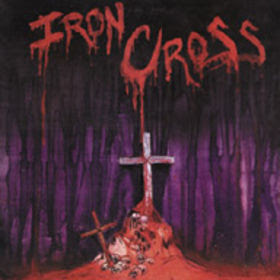 I'm sure there was a million Heavy Metal bands going under the moniker of Iron Cross in the 1980s, but it is the Orlando, Florida based Iron Cross that we're paying tribute to here. Formed in 1979, it took Iron Cross seven years to get out their self-titled debut. It's a pretty fun record of typical '80s metal with dopey lyrics about, y'know, demons, mistresses of the dark, and even the obligatory shout-out to S&M. Fans of Manilla Road and the like should take heed. I guess they (like every band from the '80s) have reformed.
Here
Posted by Aesop at 12:09 AM

This is pretty killer, but Iron Cross from Pennsylvania is hella better, check out "Warhead" if you get the chance.

You would know best. I will obey.