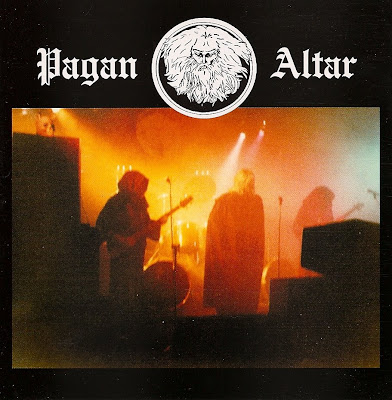 One of the more gloomy NWOBHM entries, Pagan Altar from Brockley, England are a band of mythical cult status. Pagan Altar formed in 1978. The band became known for their atmospheric and deeply occult live performances. They often appeared on stage in hooded cloaks in front of an altar, black candles and inverted crosses close at hand. They self-released the album Volume 1 in 1982 and soon after, the band unceremoniously split up, but reformed in 2004 and released the godly album Lords of Hypocrisy. 2006 saw the release of another fantastic album titled Mythical & Magical. Along with epic, emotive songs, the crown jewel of the Pagan Altar sound is the inimitable nasal voice of Terry Jones. He sounds like no one else. The whole Pagan Altar vibe is very witchy and wholly British. It's misty English countrysides and stony paths where ancient, unruly sprites loom just out of frame. It's the somber event of a witch trial. It's Christopher Lee and Peter Cushing smoking a joint at Stonehenge. Yes, It's that fucking good.
Here
Posted by Aesop at 12:06 AM

One of my favorite bands ever. "Lords of Hypocrisy" is un-fucking-touchable-- I must've listened to it every day for about two years. They capture that vibe only bands from the early 70's seemed capable of-- early Black Widow comes to mind (before they went all Jethro Dull on us).

P.S.: I should warn ya that there's a certain contingent out there that'll be quite pissed you posted this. Email me using the addy in my blogger profile if you actually care (I know I don't).

great record,great band and like every great british band in any genre they have a unique character.they couldn't possibly come from anywhere else but England. and since it's my first time posting a comment i want to express my love for your blog.great music,great commentary!keep up the good work

nice one, these guys are fucking amazing.

i can already tell from the cover

I think this might be my favorite thing you've posted.

one of my favorite NWOBHM bands, only the supremely unfuckwithable Angel Witch tops em

yes, this is the best thing you've ever posted!

I got this years ago, and still listen to it all the time. Just such a fucking perfect album.

That must be Rich Walker and his leather pants.Thanks for poopin' in Mr. Dread.

goddamn, this is amazing. great songs and wonderful vocals. Thanks again!

Yea man my first rip and comment too. Thanks sooo effing much for this AMAZING slab of Brit Metal.

Sounds like Burl Ives on vocals. Some nice keyboards on this, and you don't say that about a lot of doom records.

thanks alot for this, aesop!

Your blog has the coolest stuff. I love to visit here. One day I'll figure out how to thank you properly.

The Hounds Of Doom said...

Pagan Altar are the best band ever, the Jones Brothers wipe the floor with any one else you care to remember. Im only missing "Never Quite Dead" as I already have the other 3 full lenghts.

Whats with the all NSBM ?

Holy Cow! This is possibly the greatest thing I've never heard of! I NEED to get a copy of this on vinyl. Judging by the fact that it's kind of obscure though I'm sure it will cost me an arm and a leg. Absolutely amazing! Thanks

*bows low*
How could this fucking exist without me knowing?Thank you!!