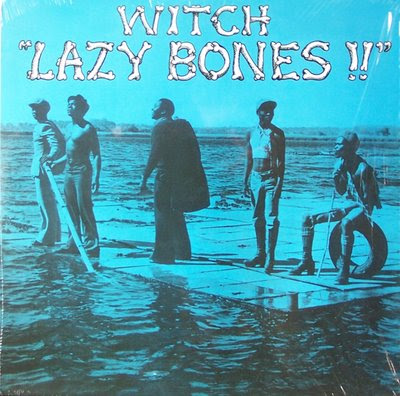 If you, like me, went all bat-shit looney for that Chrissy Zebby Tembo album I posted a while back, then you will absolutely love Witch, who like Chrissy Zebby Tembo, hailed from Zambia. Witch released just one album, Lazy Bones, in 1975. It is a work of sheer genius. Witch played the same sort of wah-wah psych as Mr. Zebby Tembo but with a bit more darkness. Check out the opening track, "Black Tears." It starts out rather melancholy and builds into a chugging, almost Sabbath-inspired shuffle before finishing with a doomy end. Lazy Bones!! sounds as if it was recorded live to 2-track with the vocals and some acoustic guitar added later. The spartan production only makes the album more heartfelt and endearing. The drum fills and vocals at times overload the mics. You can almost hear the suffocating heat of whatever slap dash Zambian studio they were in, playing their hearts out. Witch had great songs, and a pair of brilliant guitar players in Chris Mbewe and John Muma. Mbewe also is responsible for the casual vocals that further sweeten the whole affair. I really can't do this justice with mere words, it's sad, joyous, reflective, hopeful, playful, mournful, enchanting, winsome, gloomy, it's all these things and more. Just get it already!!
Here
Posted by Aesop at 12:27 AM

dude, if you got a decent rip of the violent party comp then you have to post it - the version i have is kind of 5th generation....

Nope, sounds the same as the one from Genocide Japan, I think I'll just wait a bit. Thanks, SLobo, and you know what they say about great minds.

So I now have two albums from Zambia and both are equally fantastic.

and that Invictus - Hellroar rip is coming Aesop, just gotta get my stereo setup to convert tape to mp3. Right now it can only do vinyl to mp3

This album's made my night. The vocals put me in mind of Malcolm Mooney sometimes. Ta!

LIKE THIS! african psychedelic/heavy metal..... lovely. any chance of some kwela - pennywhistle jive from south africa? mine got stolen with the car....

Hello from the south of france.
I thank you very much for this GRRRRRRREAT music and the way you make it available to everybody's ears.
Some tunes here (Motherless Child for example) remind me of old Black Sabbath albums (Ozzy's singing style). How strange things can be sometimes :)
ant1

Woah, did you know thier name was supposted to stand for "we intend to cause havoc"?

Can + Curtis Mayfield + J. Richman + later period VU= AMAZING. Had to let you know that not only do I thank you for turning me on to this record but also for giving me something to look forward to every day...seeing what new treasure you've posted! I was pretty much in the doldrums music wise and yr blog woke me up again...I even find myself going to the record store again! Thank you for all the great music!!

Right on, Dean. I felt pretty rejuvenated myself by all these great African records. Check out Amanaz and Chrissy Zebby Tembo if you haven't already.

Wow! I originally missed this one between Chrissy Zebby Tembo and Amanaz. It's my favorite of the three. What a totally cool record!

My favorite of the three as well. That first track is so deep and doomy.

my new favorite album, thanks for posting this gem! the track Strange Dream is beautiful.

Hazy beautiful and sad, music to make love to as the humid summer sky burns pink with the setting sun, frogs chirping in the distance, the scent of honeysuckle and pollen in the air.

Yes, I agree. This is indeed absolutely awesome.

Wow - this is an amazing album. Every track is a treasure. I definitely did not expect the music that was revealed when I played this. I had to put this on my wife's MP3 player so she could hear what I was talking about (over and over!).
Thank you so much for sharing this music with us.

whoa! thanks! your blog is tits, top to bottom. nice work!