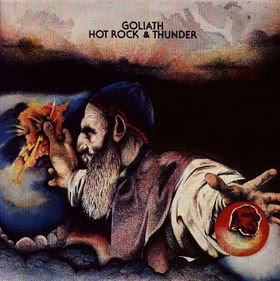 Goliath were yet another underrated hard rock band that released one album in 1972. They hailed from Kentucky. The strength of Goliath was the vocal powerhouse Jim Kitchen whose wide range pushed the whole record up a few notches. Goliath suffered from a bit of an identity crisis, trying their hand at blues-based southern rocking as well as AOR type radio-friendly catchiness. This might have contributed to their obscurity, but it's still hard to believe that the band that penned a song as cool as We're Not Afraid wouldn't have enjoyed some success. At times Goliath gets a bit goofy, but over the course of the seven songs here, there's enough greatness to forgive the occasional chaff.
Here
Posted by Aesop at 12:01 AM