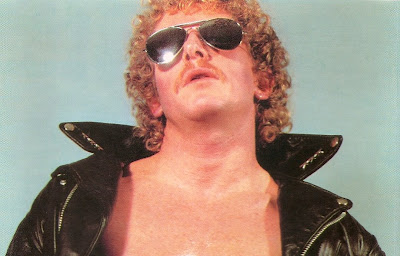 Check out the crusty credentials here. Nigel Pepper Cock was made up of ex-members of Destroy, Dystopia, Fuckface, Skaven, and Medication Time. So logic would tell you that this is some blistering political hardcore with thought-provoking lyrics about animal liberation, veganism, and the rising police state. WRONG! Nigel Pepper Cock were more concerned with needles, whores, cocaine, pot smoking wizards, and O.J. Simpson (about 10 years after the fact). Although the strength of this band was in their clever and chaotic live performances, The New Way is a fucking great record! You might have written this off as another jokey, anti-pc, novelty record if it weren't for the shredding guitar tones, and most importantly, the sleazy keyboards that coat this album in a cummy shimmer. Nigel Pepper Cock celebrated all that is unsavory and taboo, not unlike another East Bay band of old, the mighty Fang. The New Way was released in 2002 on vinyl and cd. I really really miss this band.
Here
Posted by Aesop at 12:53 AM

I would really like to hear the album that was never released :(

It's really great. It even has an homage to Prince's hot tub on it, and a song about their infamous day at the Santa Cruz Beach Boardwalk.

Excellent post, never bothered to check them out yet.

Check out the Spike In Vain record on my blog, I believe it will be right up your alley (that is if you havent heard it already)

Check out last.fm for tracks from the long lost `All Things Considered` LP. Someday some poor sucker might actually put out that LP, and be stuck with a closet full of Nigel records. I can't think of a better reason to come out of the closet..

Just got round to listening to this. Pretty great. The Crass parody at the end made me actually lol.