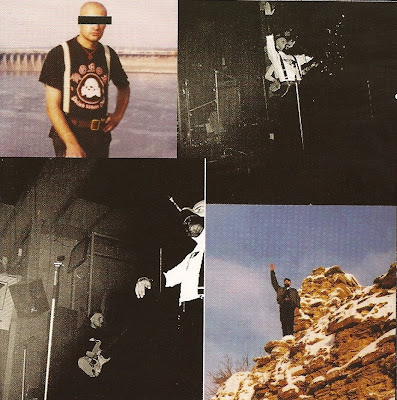 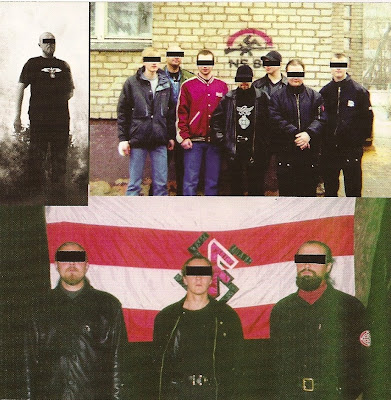 Blazebirth Hall is the name of a tight-knit group of radical right-wing black metal bands from Russia including Forest, Branikald, Ravendark, Rundagor, Vargleide, and Nitberg, as well as a few fringe members. The Blazebirth Hall is notorious worldwide for its violent ideology, criminal activities, and frequent jail sentences. Founding member Ulv Gegner Irminsson, a member of Forest, was stabbed to death in October of 2005. The details surrounding his murder remain unclear. One needs only to look at the snapshots shown above to get an idea of how truly sketchy these folks are. Despite their extremely ugly and narrow worldview, the Blazebirth Hall bands tend to make some astoundingly beautiful and reflective music, especially Branikald and Forest. In 2005 (shortly before Ulv Gegner's death) the Hammerkrieg compilation cd was released by Hakenkreuz Records. Hammerkrieg is the official statement of the Blazebirth Hall, and it provides an excellent glimpse into a shadowy world of nationalist thugs and elite black metal. Warning: This is only for those who have come to grips with the fact that black metal is not a nice place, and aren't squeamish about dubious political agendas.
Here
Posted by Aesop at 12:06 AM

Yeah, well dodgy people. Seems the nazis in Russia are having a field day as far as violence goes, tons of people killed and assaulted in recent times.

maybe it's my browser, but when i opened up the page today, your picture is exactly lined up with the beardy nazi guys' picture, so it looks like you are about to execute them. how did you hear about blazebirth hall?

Russian Black Metal is among the best of the genre these days, unfortunately it's very politically charged. Schultz, to answer your question, I have been a fan of Branikald for ages, before I was aware of the political agenda. But, then again, that's just not enough to scare me away.

I am interested in understanding a little more about their nutbag views etc. I am not finding any good links to read. Do you have any good pointers?

Bob, I know that Blazebirth Hall is connected to the Pagan Front. Pagan Front's website is down. In a nutshell, Blazebirth Hall adopt a racist, antisemitic worldview. Jews are Zionists who control everything. I know there was some conflict between members of Blazebirth Hall and some Ukranian and Polish nationalist bands, but details are unclear to me. Don't know if you are aware but Encyclopaedia Metallum is an excellent database of all metal bands.

A bit off topic but I guess this is a good a place as any to mention it but while this topic is being discussed. I highly highly recommend the band West Wall from St. Paul, Minnesota. Lyrically it's all about Germany during WW2 but while people like to split hairs about it I feel its with a bit more of historical slant as opposed to being blatantly pro-Nazi. Regardless of that minor detail this is some BRILLIANT death metal. There is a strong Bolt Thrower influence but they manage to keep their own thing going on. Very energetic, powerful and well-composed stuff to my ears. Their debut Blitzkrieg Symphony #1 is absolutely worth hearing if you're seeking good death metal.

West Wall shares members with Bound For Glory who are overtly racist. I like Death Metal.

I'm a Marxist of sorts, but love Russian nazi music. Not sure if it's the oi! stuff but I guess I'll find out soon enough. Thank you muchly, your obscure posts are very appreciated.

Bound for Glory side project ? hmm looks great, like them. btw there's a fucking lot of GREAT racist / nazi / homophobe /sexist / communist / gay / dumbass bands, and that's not a problem to me. you just have to don't support what you doesn't deeply think. so, I'm a huge fan of burzum butI'll never spend some cash on CD or shirts cause I'll never give moneys for this kind of people. And it was the same to me before mp3, I used to record CDs of my friends on tapes..

some cool raw stuff on this compil btw.

I'm not much into the NSBM stuff but here's a link for those who are interested:
http://valhalla.ulver.com/f155/

Lots of albums there ;)

An old high school friend made me a tape back in the early 90s with Skrewdriver on it. I always felt pretty guilty listening to it. Damn those wicked infectious guitars. Had to cleanse the room with Public Enemy afterwards. Do you have any of that stuff Aesop? (Skrewdriver, not Public Enemy)
Kelly from Tampa

Best blog I have found for guilt free consumption of totally bone-headed douchtardery...

Speaking of Russian NSBM, have you ever heard the Temnozor album 'Folkstorm of the Azure Nights?' It's pretty all right, if you like your black metal a bit on the sensitive side. I made a copy for a friend who is not that familiar with BM (+ a jew) and he was into it. I look forward to this compilation, thanks you!

Thanks for the album. I agree that their music is superior to their ideology...

excellent synopsis of blazebirth hall. but where did you get your information?

The liner notes to this and other BH releases, the forums, rumor, conjectre, zines, internet...Info on these bands is scarce.

"Hammerkrieg" was released in 2003, not 2005 (or 2004 as mentioned in Metal Archives and other shitty whorehouses) and is not very hard to find, it's still available at some distros. So better buy the album and stop spreading crappy MP3 downloads.

Hey get a load of this: I am a Jew and I'm very pro-Israel and pro-Zionist. I also happen to love underground metal in general, and black metal in particular. Much of the music is brilliant and chaotic, and I can't get enough of it.
'Stormheit' by Branikald is a friggin' kickass metal album, and that's all I care about.

Finally d/l-ed this. Thanks for posting it along with the info. I didn't know too much about these bands and their specific dumb-ass politics. Adding to what you mentioned, from the M-A review: "Ulv Gegner Irminsson, the mastermind behind Raven Dark as well as a musician for Forest and Nitberg, who was murdered in 2005, Dagorath, the creator and main driving force of Rundagor who ended up leaving the movement in 1999 and was apparently soon killed in retaliation for having left, and finally Kaldrad Branislav, the creator of Forest and current member of Temnozor, co-creator of Nitberg, musician for Rundagor and Raven Dark and sole remaining important member of the Blazebirth Hall who is still alive."

That said, "The Steel Strings Of The Spirit" by Brainkald is really good. Sounds like a trippy psych thing like Roy Montgomery.

Have any full lengths of Forest or Branikald you could up at some point? Really great stuff despite the dodgy agenda

I do and I will soon enough

Thanks for this great comp. I was a fan of Branikald long before i became aware of their political agenda, but still it's no problem for me to enjoy their wonderful records. And on a site note i personally think that most musicians who make incredible music are in private life and in terms of political or other views a little bit "problematical". But that doesn't concern me, it's the music that counts and nothing more.

Good music, but again... the whole political thing has no place in music... especially one this ignorant.

Does anyone know who the people in the pictures really are? I can see Ulv Gegner Irminsson and Kaldrad there, but I would like to know if any of these people are Dagorath or Wizard or anyone else. Probably very difficult to answer though..

I've done some digging, but most of this is still just speculation. Anyway, all the top 4 pictures are of Kaldrad. The fifth picture is of Irminsson. I don't know about the 6th picture of the group, probably just Kaldrad and his non-musician nazi friends. The very bottom picture is Irminsson on the left, I believe the middle is Ransverdi from a band called Sternatis (drummer of Nitberg?), the bearded fuck on the right could be Kaldrad. Hope this helps.