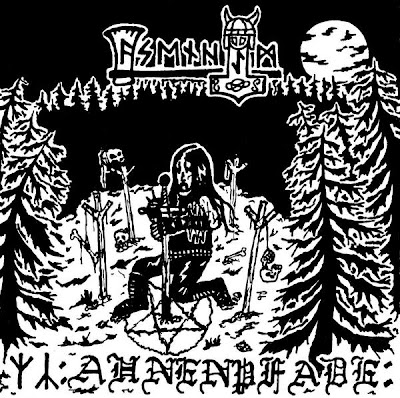 Asenheim is a one-man German band playing some of the weirdest, most amateur, fucked up black metal there is. Headed by a mysterious entity known as Tiwaz, this is just the sort of outsider retard art that makes me wet myself. Bands like this are Cosmic Hearse's raison d'être. This is the reason black metal rules, like the early days of punk, anyone can do it. Any sullen misanthropic teenager with a guitar and simple recording software can be a "band", and while the results may not always be musically competent, they're often brilliant. As is the case with Asenheim. First let's study the cover art, a drawing of a stumpy black metal warrior (presumably Tiwaz) alone in the wilderness, surrounded by Elhaz runes fashioned from sticks and adorned with bloody skulls and bones. Under the full moon's glow, he thrusts his mighty sword into the center of a pentagram drawn in the snow. In theory it sounds cool enough, however the execution seems like that of an adolescent boy. Nonetheless, it is a most fitting cover for Ahnenpfade, Asenheim's first full-length album. Almost all the songs on Ahnenpfade start with a lone clean guitar intro having nothing to do with the all out bedroom black metal assault to ensue. The vocals are mixed very high, the drum machine is small and cheap sounding, and the arrangements are peppered with random out-of-key synths. And this goes on for an hour, 15 songs ending with a cover of Absurd 's Der Sieg Ist Unser. Genius!
Here
Posted by Aesop at 1:06 AM

once again, the write up had me crackin the fuck up, "stumpy black metal warrior"
man thas hilarious

and is it pronounced 'teee-waz'
or 'te-watz'
like 'twats'
either way this shit rules, and i could only wish to be this crative

man, this is the dope next-level shit that keeps me coming back. aesop, you are a asset to our species.

check out skullflower's xaman if you don't have it already.

My town had its very own band of this ilk a few years ago. It was a sloppy, amateurish and indecipherable mess but as I knew the guys I always just pictured the two of them them holed up in the garage grinding out odes to Gorgoroth and it cheered me right up.

Their name was Invictus. Link at metal-archives is here:

I have a cassette of their Hellroar demo which I will convert into mp3 and link to you.

Awesome. I look forward to hearing it.

Thanks, Anon. Look forward to hearing this.

Couldn't get the link to work.

if the link doesn not wort, tere is also one at www.myspace.com/asenheimblackmetal
this one should work

Absolutely unbelievable in the best possible way. Your blog is awesome.

awesome. worth it for "satanic mass" alone...thanks as always.

These is the reason one-man black metal bands rule in my tiny, musical universe. Quite possibly my favorite album cover of all time.

I have only recently appreciated some of this black metal stuff the way you have described this one. Listening to these tapes and demos, it took me a while to look beyond the poor performance and recording quality to realize that there is some guy/gal in a room with some cheap recording gear making a tape that NEEDS to come out because the shit he/she has to say NEEDS to be heard by at least 58 people. I love it.