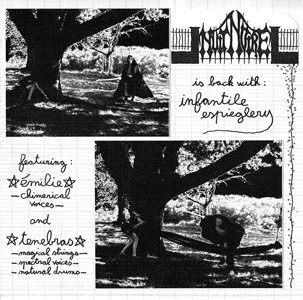 That's right, Faerical Blasting Punk. That is how French outsider black metal band, Nuit Noire, describe their sound, and why not? It aptly describes their paper-thin and playful sound. Starting out in 1998 as a more straight forward norsecore band, they morphed into one of the strangest entities on the increasingly bizarre French black metal scene. Perhaps the strangest aspect to Nuit Noire are their lyrics about childhood, frolicking, playing, and sex with faeries, Nuit Noire love faeries. Infantile Espieglery was released in 2006. It is such a weird album of sparse, clumsy punky black metal so clearly lacking bass to fill out the sound. Singer/guitarist Tenebras' snotty vocals sound as if they could only come from a disillusioned French adolescent. Every so often he is joined by the rather malaise-stricken female voice of Emilie, his girlfriend and playmate. To further the childish agenda, Infantile Espieglery bears rather interesting art direction. All the text is hand-calligraphed in what appears to be the work of a pre-teen girl who really loves princesses and horses. The cover art is an old school, zine-style cut and paste job; like the music, it seems unfinished and intentionally so. Nuit Noire is not for everyone, but those who understand will immediately be compelled to shed their hardened exterior and run and dance in the forest with them. Are you ready for the night? Are you ready to be a child?
Here
Posted by Aesop at 12:05 AM

Holy shit holy shit holy shit, wait a minute! This HAS TO be the same Emilie from the amazing French "tectonic sludge doom" band Monarch! The artwork is the same (as done in Monarch, and her other band Rainbow of Death, by their bass player MicHell), the whole aesthetic.... it HAS to be! Thank you so much for posting this!

PS - It says the file is temporarily unavailable! :(

Hmmm, I just tried it and it worked fine.

Heya!
I've been following your amazing blog fo a while now. Thought you might like to check out this Norwegian Black Metal photo exhibit by Peter Beste at the Steven Kasher Gallery
>thisaway>>>
Keep the good work up!
humdinger

Strangely, that is what the handwriting of a good 85% of the french looks like. I realized years ago that french handwriting lessons must be very very strict because I have kept 6 different handwriting samples (all from guys and in the form of odd love letters to me in college after a trip to Europe after HS), I found it really odd that it was all so similar and so feminine.

haha love this record! just got this and "Fantomatic Plentitude" a couple of weeks ago. been listening non-stop. you rule aesop!

i recommend finding anything by the french band CARNAC ATTACK, though you may already be aware. if you aren't, and happen to know him, ask weasel walter to let you borrow the cassette i perma-loaned him last year.

bloody amazing to say the very least!
I have this one and the latest has been released by a japanese label called Armageddon (sub-label of Obliteration). Didnt they also do a Circle Of Ouroboros split 7'' as well ?!
Seriously great !!

They've done a few splits but with whom I can't recall, CoO might be one, that'd be a fitting match.

pure feral fairy shit gold. some kind of whimsically inept genius is at play here. this is absolutely addicting. i love it. almost as much as my wife's pussy.