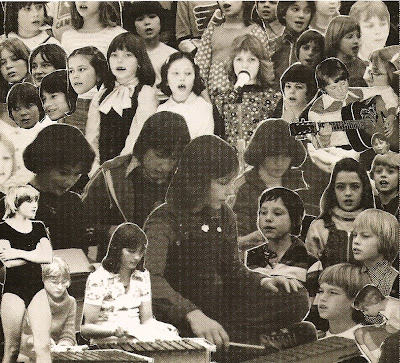 No album has successfully captured the vague sadness of childhood better than The Langley Schools Music Project's Innocence and Despair. Perhaps because it was made by children themselves, perhaps because all these children have now grown up and may well mourn the loss of innocence as adults tend to as they continue their slow crawl towards the grave. The inherent woe and fragility of childhood fills every fumbling nook and cranny of this album. It is painful and bittersweet like the death of summer, or a Judy Blume book. This album will simulteneously warm and break your heart.
Long before Jack Black or School of Rock there was Hans Louis Fenger, a typically broke Vancouver rocker who took a job at Belmont Elementary in rural Langley, British Columbia in 1971. He started teaching the kids pop songs of the time using no theory or sheet music, showing the kids just enough to get through the arrangements. The kids loved it. Four years later Fenger was teaching grades 4-7 at three different schools. Soon after, Fenger organized a giant concert in one of the school's gymnasiums with kids from all over BC to perform for parents and staff alike. The instrumentation was as follows:
Fenger enlisted his friend Glen Finseth to help record the album. He brought his Revox 2-track deck to Glenwood Elementary and strategically placed two mics in the massive gymnasium. This attributes to the ghostly atmosphere of the record, it adds to the bizarre sense of melancholy of the performance. The kids recorded nine songs in one take. Fenger pooled up money from the parents and faculty and pressed a scant 300 LPs to give to those involved.
In 1977 Fenger was teaching at Wix-Brown Elementary in Langley. It was there that a second recording was made of 12 songs. Fenger estimates that 150 kids took part in these sessions, as well as a gymnastic performance set to Space Oddity. In 1979 Fenger returned to Vancouver where he still resides to this day teaching music.
One of the reasons Innocence and Despair works so well is the choice of songs. The delicate nature of Brian Wilson's compositions are best sang by children, and five of his songs represented here. But the clear winner is the haphazard and absolutely devastating version of Space Oddity. The Langley School's rendition of The Eagles ballad Desperado is another choice cut with 8-year-old Sheila Behman delivering the song with more vulnerability and longing than any adult could ever muster. This is precisely why Innocence & Despair is heavy without being loud, beautiful without being well-orchestrated, and absolutely moving without being overly concerned with being so. Innocence & Depair is the sound of the heartbreak of a fleeting childhood, the sound of a thousand scraped knees on the way to the numbing ennui of adulthood.
Here
Posted by Aesop at 12:57 AM

Originally I uploaded this to Mediafire, but then Robzub brought it to my attention that it was taking a long time to dl. I have moved it over to Megaupload and checked it. SHould be fine now. Enjoy.

LOL, I think I was downloading it when you first pulled it from mediafire and I got all these weird errors. I went back later and grabbed it again.

This is a really interesting recording. I don't have any love for the beach boys (I know... I know...) so the cover of Wildfire is, I think, my favorite on here, as well as the haunting Desperado cover that you pointed out.

What a line "the sound of a thousand scraped knees on the way to the numbing ennui of adulthood."
You should write for NME or something! I'm going to look up what ennui means.
No offence intended.
Keep up the posts
Cheers
Greg.

Greg, thanks for your kind words. If you know anyone looking for a smug, snarky writing guy that fails to meet deadlines, send 'em my way.

I've tried over the years to enjoy them, but I think they were just poisoned to me as a child. My stepfather is a fan and a complete fuckhead. I really have tried though. I am a lost cause. They are far more listenable sung by children, though.

Awesome pick Aesop. The cavernous reverb on this recording just echoes and echoes forever. Such a lonely sounding group of kids too. I wonder if Fenger and the Wix-Brown parents were aware that they were making such a dark LP.

How did I never know before that you are a fellow Beach Boys fan? Makes sense I guess. Can't wait to hear this one. I've recently learned that I love hearing music played by children.

my mom loves this album

And soon you will too, Harry. See, that's one of the many beautiful things the Hearse does, it brings families together.

thank you so much for this! i was looking for one of these songs to put on a mix cd and came across your site. i'm glad i did, you've got a lot of really great stuff.

This is a great one. My Brother in Law got me into these guys years ago. cheers.

Best version of Desperado ever! Sun City Girls thirty second rant of the same title takes a close second. You look so lovely with your panties down.

That last sentence of my above comment should be in quotes. -Sun City Girls. It might be unethical to quote song lyrics without proper citation.

Hey there, any chance of a re-up, since Megaupload got raped by the FBI? Would be very grateful, this seems really intriguing