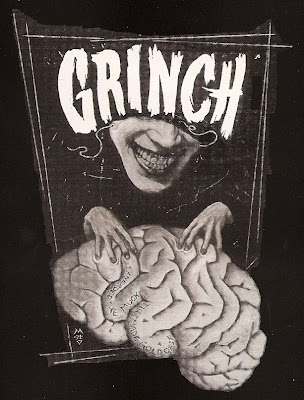 Grinch were a post-hardcore band from Oakland. Grinch included, at one point or another, members of Christ On Parade, Possessed, Fang, Indestroy, Crimpshrine, Sacrilege BC, Machinehead, Amebix, Attitude Adjustment, as well as yours truly. I played drums for Grinch on their last US tour in 1996. The tour was a particularly bizarre and tough one. It was the three regular members of Grinch, with me, and we had Tim from Zygote and Pat the Redneck acting as roadies. Pat brought along his .45, and Tim can sing every Ramones song in German, so of course they were an asset. Some highlights included being woken up in the desert by cops with guns drawn in Arizona, playing a show with Man Is The Bastard in San Diego in which only 10 people came, seeing Eyehategod with Seth from Anal Cunt singing in New Orleans for Mardi Gras, Kirk from Buzzoven igniting a huge fireball in their van while freebasing cocaine, stealing gas, stealing beer, meeting a nazi skinhead with downs syndrome in Kentucky, doing tons of heroin in NYC, hanging with Sockeye in Ohio, and the big gang shootout involving members of Word Salad at the very end of the tour in Albequerque. When we came home we all fucking hated each other. Now, some 12 years later I look back in fondness and I am still very good friends with everyone who went on that tour. This demo tape was recorded shortly before the tour (I don't play on it.) Later on, it was released as a split 12" with fellow Bay Area heavies, Lost Goat. Over the course of their run Grinch released two full-length albums, The Blacking Factory in 1992, and the crushing Eden in 1994 (anyone have a copy they want to give me?) After their breakup, guitarist Mark Marcus went on to play for Damad, Idon Bryant joined Strychnine, and Ron Nichols now plays in both Fracas and Hammers of Misfortune.
Here
Posted by Aesop at 12:56 AM

Indeed I did. I even was in a short-lived folk band afterwards with Idon and Ron. Love those guys.

Geez! Thanks for sharing your adventures. I've been rockin' the Grinch/Lost Goat split for a while, but had no idea about Grinch's rich pedigree.

If youre gonna give a story like that then youre gonna have to give us a rare ass recording from the Fuckboyz and the story to go with it.

totally off subject, but you may be into this as much as i am!
http://www.regionrockrecords.com/
buddha is posting a bunch of good shit.

Wow, Vanbuilderass, WT Superman... My old band Hickey played with them. Thanks, this brings back memories of of 13 years ago.

Now THAT is what touring is all about, son!

I MAY have some Wheelchair Motherfuckers in my garage somewhere. I used to trade videos with one of those dudes way back in the early 90's but I can't promise you anything as my life - like yours - has taken a million ups and downs since then.

i have a vinyl copy of "eden" you can have. next time im in the city ill let you know and maybe ill see you at zeitgeist or something.

Thanks for posting the Grinch material.

God damn it thank you thank you thank you. This is one of my all time favorites. Even though I had done the art for one of the versions of this release all I had was a cassette of this album and I haven't been able to hear it in fucking years. I can't tell you how much I enjoyed listening to this today. Thank you.

The dreadlocked scumfuk that fell out of the burning Sour Vein van in New Orleans was...ME!!!! I was invited to take a nap in the van and awoke to it on fire. I think somebody left a lit cigarette on the dashboard or something. I nearly died but the Buzzoven guys helped me stomp out the flames and we all rushed inside just in time to catch Eyehategod.

i still have that "eden" vinyl for you..gonna be headed back up to the northwest,but if you still want it shoot me a mailing address at

Huh. I didn't know you played with Grinch. I had this very vague memory of the band and of them being somehow associated with Hell's Kitchen in the early 90's. Jimi and Idon both went on to Strychnine, so now it makes sense.

can you re-upload please.
Megaupload RIP