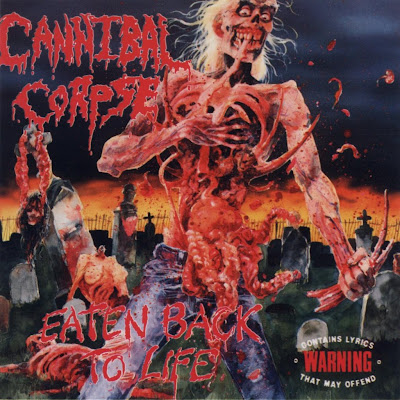 Dude! Stop being such a limp-dick, candy-assed queerbait and listen to some motherfucking Cannibal Corpse with your fucking bro. That's Chris Barnes, dude's wicked fucking sick. I know shit ain't goin' too cool for you with your mom marrying that dickwad, and you getting suspended for punching that fucking asstard in gym, but forget that shit for now, bro. Just chill and smoke some of this shit my older brother's buddy brought back from Amsterdam. Oh, fuck dude, you hear that bass player? He's hella fucking brutal, his name's Alex Webster, dude is fucking sick. This song is killer. It's called "Scattered Remains, Splattered Brains,"duuuuuuude. "Prepare to witness a place of gore/Of legal dissection and blood on the floor/Carved up corpses, in the corner/Sliced up by a psychotic coroner/Slice, dice, chop them haphazardly/Like laboratory mice, splatter brain matter/Pound on the skull until it shatters." How fucking sick is that shit, bro? Dude, things are gonna get better, they fucking gotta, man. Soon we'll be 18 and we can get the fuck out of this bullshit town. We can get a place in the city and start our fuckin' band, bro. We'll play some sick ass brutal shit, bro. Oh fuck, "Born in a Casket." This song fucking slaaaaaays. He's totally singing about banging some dead bitch. "I love to fuck the dead/demons in my head/Tearing at my brain." Yeah, man, don't let all this dumb shit fuck you up. 1990 is gonna be a killer fucking year for us, dude.
Duuuude!!!!
Posted by Aesop at 12:00 AM

What a way with words.
I understand that lingo!
Aesop love ya bro...

My friend and me were listening to this tape way back when. His mom said it sounded like horror house music but it sounded like whore house and we made fun of her the rest of the day. Then we stayed up all night watching TV.

Thanks for the memories, CC!

ps the "word verification" is komuuh, which should be a band. now.

The first death metal albums I ever heard back in 10th grade were this and Deicide's Serpents of the Light. Ah memories!

i just want a hamburger

It is sort of like return of the hamburger.

Great cd... I remember finding this used a few years ago. Probably pawned by some metalhead who is now really regretting it...

Ever hear about how Jim Carrey used his celebrity muscle to cowlick these guys into Ace Ventura? I wonder if he's still up on this stuff.

Well, I have seen the movie, but I always assumed it was some in-the-know writer or casting stooge that hired CC because they were clearly the most fucked up.

I dont know shit about death metal, but if were talkin hamburgers Id much more prefer the Deicide you served up.

Best album from a band that went on FAR too lonG!

Yes, they did wear out their welcome after "The Bleeding", the last CC album I bought and it was a cassette.

I bought this on cassette when I was 11. The record store clerk made my mom come in and buy it for me because of the artwork. The only time that ever happened to me.

my cousin made me a copy of cannibal corpse when i was in 7th grade. my mom took it away. i think it was butch. @ birth. he put Exhorder's Slaughter in the Vatican on the B-side. i think that was the name. dude do have that... i'm 31 and listening to this makes me feel like my mom is pissed. awsome.

used to never like this band,never paid em much attention,but now i got mad respect for em. still with the bloody guts and impaled dicks and shit,even at such a big level,thats pretty alright