No One Left But Me 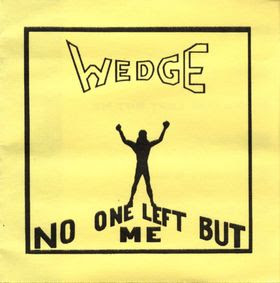 This motherfucker is rare, as it was privately pressed by the band themselves in an edition of 500 in 1974. Wedge (formerly Orange Wedge) were Baltimore's premier purveyors of kick ass proto-metallic hard rock. Pretty solid album, but the title track is a standout. I wish I had more to tell you but information on Wedge is as hard to come by as the record itself. If anybody cares to fill in the blanks it'd be much obliged.
Here
Posted by Aesop at 12:01 AM

Pretty cool. No the great, but worth the listen.

You said it's never too late to comment. Pulled this one today to spin and the singer's voice is remarkably similar to Allan Clarke of The Hollies ("Long Cool Woman in a Black Dress"-era especially). Good, musular rock and that voice!

Thanks for all the music, Cosmic Hearse.