If Wishes Were Horses Beggars Would Ride 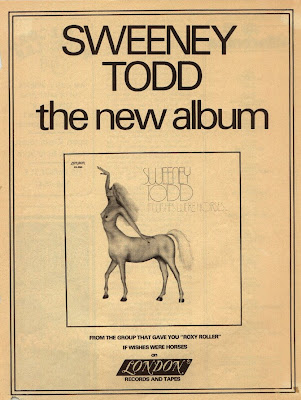 Sweeney Todd was a Canadian glam band that had amidst its ranks a young Nick "Hot Child In The City" Gilder on vocals and an even younger Bryan "I wrote every shitty song in the 1980s" Adams on guitar. The band scored a minor hit with the tune "Roxy Roller" and then Nick Gilder jumped ship to seek success on his own. For the second album, 1977's If Wishes Were Horses... Bryan Adams assumed the role of singer/songwriter/guitarist for the group. The album is a totally enjoyable slog through Queen-like pomp and Broadway scale cheese. It's almost enough to make you forget that Bryan Adams penned such shit like "Cuts Like a Knife" some short 6 years later. This album is gay, but in the good way.
Here
Posted by Aesop at 1:27 AM

Quite possibly the best write-up yet. Being a Canuck myself, the BA hatred is totally justified.

Yeah, but for every Bryan Adams there is a VoiVod.