The Ghetto's Tryin' To Kill Me 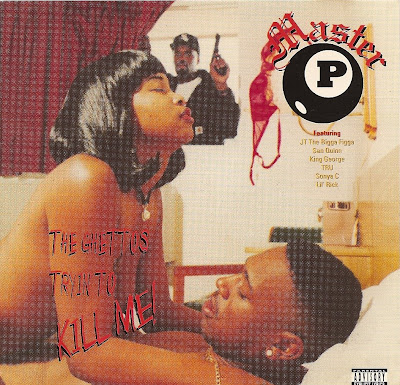 Don't you just hate when you're ball-deep in some ho at the mo-mo and some motherfucker comes in and puts a cap in yo ass? The worst part is that awful feeling that you have been set up by a bitch. You thought she was into you, but really she was just into you being shot. Being a true gangsta nigga is a lonely life, it's a life of constant paranoia and suspicion, and no one knows this better than Master P. On his third album The Ghetto's Tryin' To Kill Me, Master P really digs deep to give his audience the straight fucking dope on what it means to live such a life. It's a late-night creep through the mean streets of Richmond, California where life is cheap and some of these ho's jack. Master P plays the role of a sympathetic antihero trying to warn you of the perils of being a straight baller from the Rich. He's like a guide, he's like a ghetto Tenzing Norgay, and you are the lily-white punk-ass Edmund Hillary. On the track "Something Funky For The Street," Master P takes you through the process of making some delicious home-made crack for all the dopefiends (I like to add a little nutmeg around the holidays for a more down-home taste). But even more helpful is the track "Study Being A Gangster", an infomercial for Master P's comprehensive self-help book. He assures you that you will learn how to do a drive-by, how to smuggle drugs from city to city, and most importantly, how turn an ordinary girl into a street ho (not as easy as you might think). One my favorite cuts on the record is the play-by-play account of an armed liquor store robbery called "211". For the job P brings along a female accomplice named Sonya C who sounds absolutely adorable when she spits the lines, "So don't be talkin' fuckin' Japanese/Understand it's a jack/give up the cash/or you'll be Swiss cheese." Sadly, this is all we get of Sonya C. The Ghetto's Tryin' To Kill Me wraps with "No Limit Party," which Master P assures you that there is, in fact, no party like a no limit party (because a no limit party don't quit), and why should it really? As long as there's dank to be smoked, dope to be bubbled up, player haterz achin' to get they wigs split, and trigger-crazy ballers goin' loc on some old school stoney g-funk, then Master P is down.
Here, Bitch!
Posted by Aesop at 12:03 AM

"You thought she was into you, but really she was just into you being shot."

Nothing can beat the "Richmond, CA as Everest" analogy.

On the track 'Commercial I Got The Dank', The Tom Waits song 'Underground' is sampled. Amazing.

Jayzuz - that's a fuckin mental cover on that record!

This site is excellent - I've run out on MB's for the month on unknown bands you've written so well about!

hope he nutted befoe he got capped

thanx for this...havent heard it yet,but im finna pop the top on some e n' j and bump this..ill let you know what i think